Those are the feelings that inspired Confessions, a new kind of story available on Dipsea. In Confessions, characters divulge steamy secrets to the listener, who’s also part of the story. Maybe it’s the story of a past hook-up, or about the night the narrator and listener first met. Whatever the situation is, the experience of listening to the story is one like no other.

Simply engaging with intimate content before interacting with someone is enough to loosen the lips and open the floodgates of our most classified information.

But is it just the telling and hearing of secrets that feels sexy, or does feeling sexy also inspire one to air out their deepest, darkest, (sexiest?), secrets? As it turns out, it’s a bit of a chicken and the egg situation, at least according to science.

A 2017 study published in the journal Personality and Social Psychology Bulletin concluded that you don’t need to be intimate with someone in order to bare your soul to them. Simply engaging with intimate content before interacting with someone is enough to loosen the lips and open the floodgates of our most classified information.

The title of the paper pretty much says it all: “Sex Unleashes Your Tongue: Sexual Priming Motivates Self-Disclosure to a New Acquaintance and Interest in Future Interactions.” In the study, participants were put through three separate tests.

And while none of the participants in the study went on to have sex (that we know of), it can be assumed that, for most people, all systems would be go after a vulnerable revelation. But we get it, telling secrets can be hard, especially in person. That’s why they’re called secrets. However, that’s also why, every Sunday, we give people the opportunity to practice in the Dipsea app. In addition to our Confessions stories, every Sunday we open up the Dipsea Confessional in the app.

With questions like “Describe the hottest sex you’ve ever had.” or “Have you ever been in love? How did it feel?” or “What’s one thing you find sexiest about yourself?” it’s no wonder that people are chomping at the bit to answer them. On Mondays, we share some of our favorite answers in the app, anonymously of course. Because you can’t time travel, here are a few of our favorite Confessional questions and their responses:

What’s one thing you find sexy about yourself?

My confidence. It’s been quite awhile since I’ve felt good about how I look and value myself because of high school bullies and toxic exes. But now that I’m finally out of my shell again, I’ve learned to not care what others think or say about me. I even make a point to look in the mirror every morning and tell myself “You are beautiful.” “You are enough.”

I’m typically quite shy and soft spoken, but I’m the complete opposite as a lover. This usually takes my partners by surprise—in a good way. I love that I’m able to express myself confidently and freely with sex (hasn’t always been the case). I also love to please—so to me confidence + taking the time and care to be attentive/giving is sexy!

Have you ever had a crush on someone off-limits?

Of course! I still do—he’s in a relationship and so am I. I’m not sure if I would take the chance if the opportunity presented itself, but I fantasize about the possibility quite often. We’re both dancers—he’s super awkward and not really my type, but that’s exactly why I want him. Not for a relationship, but for a moment…or two ;)

I had a crush on my trainer. She told me she has a boyfriend, but they’re not living together. Invited me for a weekend drink and told me I could stay over at her place with one condition—that we had to share the bed. I ended up not staying over because I was a 🐔

What are your foreplay must-haves?

Slow kisses and drawn out make-out sessions are so grounding. Nipple play is non-negotiable for me! I have amazing tits, and they need to be worshipped. Dirty talk is preferred and I love pre- and post-sex cuddles. As far as I’m concerned, foreplay is ongoing and doesn’t have an end bracket. Play with my hair and stroke my thigh under the table. Grab my ass at Whole Foods. Keep me ready.

Neck kisses, dirty talk, so much dirty talk, trailing fingers along my belly and thighs, teasing my vulva, and lustful looks.

It’s really varied. It can be regular things like cuddling, or sometimes it can be a wrestling match with biting and Dom/sub stuff before anyone even gets properly naked. Foreplay should be like lube—a necessity, but one that is fun and should be given the respect it deserves.

Teasing, gentle caresses, but also knowing when to roughly grab my hips or my arm and leave me wanting more. Feeling him hard behind me or under me still clothed. Slow passionate kisses, sigh 😌

Want to submit a confession of your own? Hop into the Dipsea app on Sunday and check out that week’s question. Not ready just yet? Explore our Confessions stories below and ease yourself into the idea. Remember, practice makes perfect! 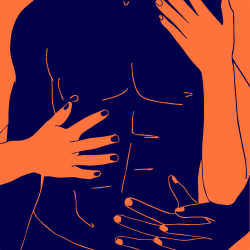 Just Between Us: Lawrence 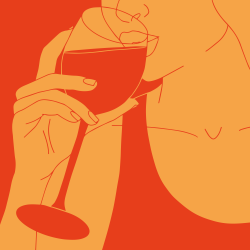 Just Between Us: Abby