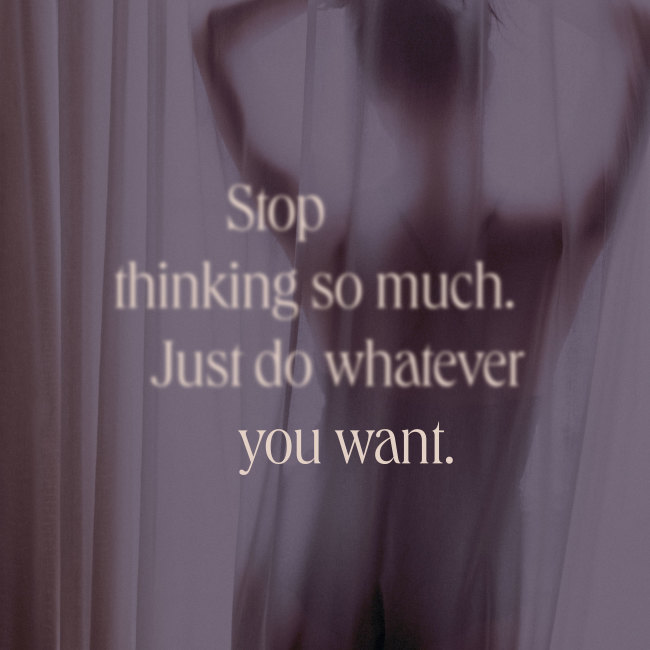 How to tell if you're bi + tips for discovery and exploration

Society finds it easier to accept individual differences if they fit into neat categories. The messaging we often receive is that we are either one thing or another—introverted or extroverted, an artist or an engineer, gay or straight. But very few of us fit perfectly into any particular box—our identities often fall somewhere in between. If you're wondering how to tell if you're bi, you may be curious about what your desires mean and how to categorize yourself.

Sexual identity is fluid, meaning it can change throughout your life. You may identify as straight during most of your life only to discover that you're more attracted to same-sex partners in your thirties. Then, in later years, you may move back toward the middle and identify as bisexual.

When you question your sexual identity, tons of questions pop up. What does bisexual mean? How does someone know they’re bisexual rather than lesbian, gay, straight, or another sexual orientation? How do you talk about your sexual identity with people in your life? Read on to learn how to tell if you're bi and tips for what to do once you decide.

What does it mean to be bi?

There are no set criteria you can use to determine if you're bisexual. This may be frustrating as you search for concrete answers, but it’s also freeing—everyone gets to choose the label they want to describe their sexual identity.

That said, it helps to have a definition to work with. The definition of bisexuality from PFLAG says that if someone recognizes their ability to be attracted to people of more than one gender, they are considered bisexual. The attraction to different genders can be sexual, romantic, and/or emotional.

Bisexuality is about attraction and how you relate to people. For example, a bisexual woman might desire both cisgender women and cisgender men. Or, she may be attracted to transgender folks or nonbinary people. If you're wondering how to tell if you're bi, remember you don't have to like each gender in the same way or even the same amount. You just have to be attracted to more than one gender.

There's more than one label for people attracted to more than one gender. The term bisexual doesn't fit everyone. There are many different labels in the LGBTQIA community because no one word suits everyone's needs.

Some people identify as pansexual because they can feel attracted to all people regardless of sex or gender identity. Other people choose to call themselves queer because they identify as members of the LGBTQIA community but don't want a specific label.

None of these labels requires a person to have sexual experiences with every gender they find attractive. Self-identification is all that's necessary.

How to tell if you're bi: 4 questions to ask yourself

Some people know they're bisexual before they enter high school. Others live their lives as straight people only to become bi-curious or experience attraction for same-gender people for the first time later in life. While no checklist will tell you if you're bisexual, it may be helpful to consider your sexuality using the following questions.

While the answers to these questions won't tell you whether you're bisexual, they may help focus your self-discovery and lead you to the answers you’re hoping for.

Am I attracted to more than one gender?

It can be difficult to pinpoint exactly why we’re attracted to the people who turn our heads. It’s often more than physical appearance—confidence, the sound of a voice, or the way someone smells all play a role. If you’re bisexual, you’re likely to have experienced the butterflies-in-your-stomach feeling around attractive people of multiple genders.

If you’re questioning your sexual orientation, it may be helpful to explore that attraction a bit. Switch your dating profiles to the other gender and see how it feels to swipe. Perhaps next time you’re out and find yourself drawn to someone of the same sex, entertain that feeling with a bit of flirting to see how it feels.

If you’re not ready to involve others in your search, try fantasizing about rolling around with people of different genders during your next solo sesh.

While not all sexual fantasies are destined to become a reality, if you regularly fantasize or enjoy sexual stimuli involving more than one gender, it’s a good sign you have bisexual tendencies.

Being bisexual is all about attraction and self-identification, so even if you never have sexual experiences with people of multiple genders, you can still be bisexual.

Am I confused about my sexuality?

We live in a society that assumes heterosexuality unless people say otherwise. This means you may grow up thinking of yourself as heterosexual just because no other options were presented to you.

If you feel confused and find yourself typing “how to tell if you’re bi” into the search bar on Google, it’s actually a good indicator that your sexuality lies somewhere other than heterosexual. Many a queer person’s story starts with a trend in their search history—it’s a natural first step!

If you grew up without the tools to talk about your sexuality openly, it’s especially challenging to figure out if you’re bisexual. You might have voices in your head telling you that you can’t be anything but straight.

The good news is that it’s never too late to explore and see what feels right! No label is permanent, so there’s no harm in trying it on for a while.

How does calling myself bisexual make me feel?

Questioning your sexual identity can be a nerve-racking process. If you grew up in a community that was open and inclusive, you may feel excited about the idea of a sexual identity label that feels truer to who you are. If, on the other hand, you grew up around heteronormative messaging, the idea of breaking out of that mold can feel intimidating.

Try looking in the mirror and saying “I’m bisexual” out loud (we know, it’s cheesy, but try it!). If the thought of calling yourself bisexual causes intense feelings of excitement and freedom, or on the flip side, fear and dread, it’s a good sign you need to do a bit of soul searching (and possibly sexual exploration).

You don’t need to share your journey with anyone until you’re ready, but reaching out to LGBTQIA communities or a therapist skilled at guiding people through the questioning process may help you feel supported in your search.

Bisexuality and your existing relationship

Even if your relationship appears heterosexual to outsiders, you can still call yourself bi. Your relationship doesn’t define your sexuality—you do. There are bisexual people who stay in long-term relationships with the opposite gender and never date someone of their same sex, and they are still bi.

Bisexuality is a legitimate sexuality, no matter who you’re with. If you’re wondering if you’re bi, don’t let your relationship status hold you back from asking yourself about your sexuality.

Some people who discover their sexuality during a long-term, committed partnership decide to open up their marriage so they can test the waters. Non-monogamy is a legitimate relationship style that places emphasis on honesty, communication, and trust. These types of partnerships acknowledge that there is no shortage of love to go around and that having other sexual partners doesn’t diminish the strength or legitimacy of the committed relationship.

But then again, many bi people realize they’re bi and happily stay in their monogamous relationships. While a common stereotype is that bisexual people are more likely to be promiscuous, that isn’t true. That harmful notion assumes: A) having multiple sexual partners is morally wrong, B) being monogamous is right, and C) bisexual people can’t control their sexual attraction.

The truth is that you can have as many safe, consensual sexual partners as you want, but being bisexual doesn’t make you more likely to cheat in a monogamous relationship than any other sexual orientation.

How to come out as bi to loved ones

If you come to the conclusion that you’re a bisexual person, you may wonder how to come out to your friends and family. The answer depends on how you want to handle the situation. Some people live their bisexual identity loudly, and others prefer to keep their sexual orientation private their whole life. The choice is yours.

When deciding how to discuss your sexual identity with loved ones, think about how they might react. If you have concerns about biphobia, you may want to bring a best friend or support person with you for the conversation.

Some people initiate a formal conversation where they officially come out to loved ones as a group or one at a time. Other people decide to live their lives and introduce romantic partners as they come without the fanfare of a formal discussion. Whichever path you choose, remember that the most important thing is that your sexual orientation feels true to you.

Use self-pleasure to explore your sexual orientation