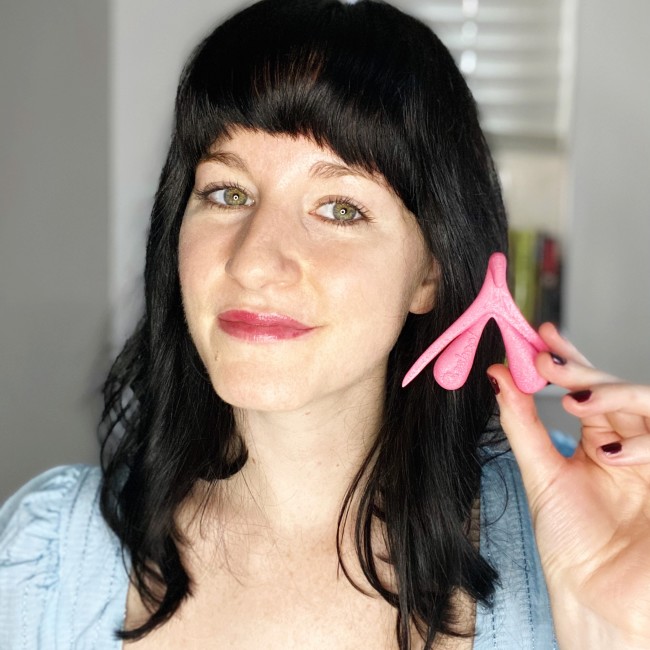 Do you know how big your clitoris is? If this question is making your eyes cross, that’s OK. You’re definitely not alone. This is Patriarchy at its worst.

Most of us (both penis-owners and clitoris-owners alike) are unaware of the full structure of the clitoris. So let us take an opportunity to enlighten, shock, and (hopefully) delight you.

The glans clitoris is just the small section of the clitoris most of us know (and if you don’t, read this). The FULL clitoris extends beneath the labia and into the abdomen. You cannot see it by looking at the vulva. The internal clitoris, or clitoral body, can reach up to five inches in some women (though the average is about 7 cm). To put this into perspective, five inches is roughly the size of the average penis.

The glans clitoris is about 0.5 to 2 cm in size. Size will vary from female-bodied person to female-bodied person. Every single clitoris, regardless of shape, size, or color is completely normal. This is also true of essentially every part of the vulva and vagina.

Having the full scope of this information is important because the study and understanding of female sexuality is still in its earliest stages. This means that many doctors don’t have enough information or understanding of the clit. What’s more, Laurie Mintz, Ph.D., a Licensed Psychologist, Certified Sex Therapist, and Author of Becoming Cliterate, tells us that “much of the new understanding has not permeated popular culture, which means many of us are still viewing women’s sexuality based on outdated ideas. The result is a lot of women are having horrible sex and blaming themselves and feeling broken.”

To give you a better understanding of the clitoris and why it’s been largely unexplored, we need to go back to some history.

Science and the historical emphasis on male bodies.

Science has long ignored female pleasure, pain, and anatomy. For example, as writer Lili Loofbourow pointed out in a 2018 feature piece on female sexual pain, if you take a peek at PubMed, there are 393 clinical trials on dyspareunia (recurring pain during intercourse), 10 on vaginismus (extreme pelvic floor muscle spasms, making penetration impossible), and 43 on vulvodynia (chronic pain in the vulva or vagina). Meanwhile, erectile dysfunction has 1,954 studies.

We simply have not devoted enough money or time to the study of female sexual pain or female anatomy in general. It’s some serious BS, but facts are facts.

Mintz thinks that it took science so long to figure out the clitoris due to an incorrect, sexist, assumption that male sexual functioning is the most important thing and that we can extrapolate assumptions about female sexual function from it. “We have too long believed that if we study men’s sexuality, we can apply that to women,” Mintz says “Even today, this bias exists in scientific research.”

We didn’t even know the full structure of the internal clitoris until the ‘90s.

You did not read that incorrectly, folx. The history of this research goes back to the work of urologist Dr. Helen O'Connell, who set out to research female sexual anatomy. Using MRI technology, she discovered that the clitoris was much bigger than the small, bud-like bump outside of the vulva, and that it extended into the body. For the first time, the true size of the clitoris was revealed. She first published her work in 1998.

It’s kind of mindblowing, considering that MRIs on male anatomy had been carried out in the 70s. Again, Patriarchy. What’s truly the most shocking is how not shocking this information actually is.

We didn’t see imaging of the clitoris until 2006.

For a little more “FML” material, the incorrect assumption that the clitoris was made up entirely of a small exterior bundle (the glans clitoris) wasn’t thoroughly examined until the 2000s. The first 3D sonography of the clitoris happened in 2008.

French scientists Odile Buisson and Pierre Foldès were two of the leading researchers in uncovering the full structure of the clit, using sonograms to document the structure, sensitivity, and movement of this very special sensory organ.

And finally, a breakdown of the structure of the clit.

The clitoris is a large internal and external organ. It is the only organ whose sole purpose is pleasure, though experts are still debating the evolutionary purpose of the clit’s anatomical placement. However, Mintz says that there isn’t enough data to make a different conclusion. She says that “until another function is proven, the only function of the clitoris is sexual pleasure.”

That is pretty damn cool, don’t you think?

As we explained above, the only part you can see is the glans clitoris, which includes the clitoral hood. The rest (the legs and bulbs of the clitoris) are internal. “Just like a penis, the clitoris has erectile tissue; in fact, one part of the internal clitoris, the bulbs, can get anywhere from 50 to 300 percent larger when enlarged,” Mintz says.

We’ll leave you with one last clitoris fact: All female-bodied orgasms are clitoral orgasms. Yes, even G-Spot orgasms. “No matter where the stimulation occurs, the clitoris is involved,” Mintz says. “An orgasm when the erectile tissue in the clitoris becomes engorged with blood, and then that blood is released with rhythmic contractions of the pelvic floor.” This is exactly what happens to the penis, minus the ejaculation.

Gigi Engle, ACS, is London-based, certified sex educator and author All The F * cking Mistakes. Her work regularly appears in many publications including Cosmo, Glamour, Men's Health, and Refinery29. Follow her on Instagram and Twitter at @GigiEngle.