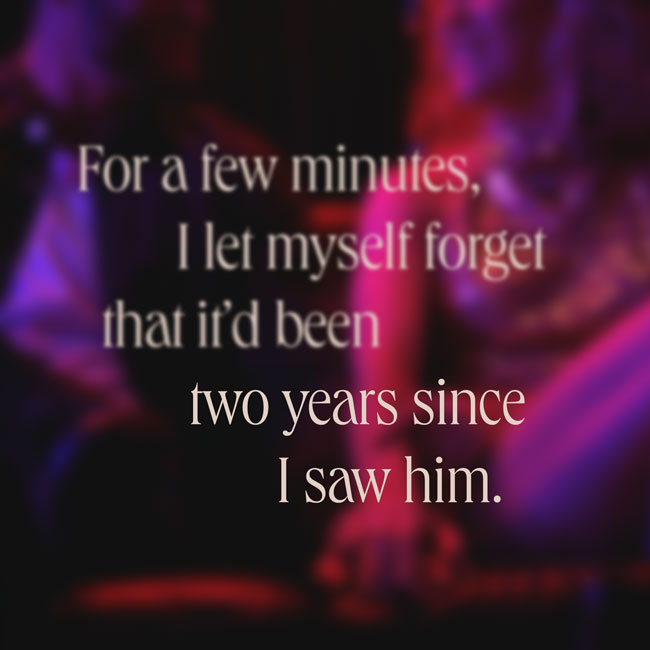 Should you have sex with an ex

Want to explore sex with an ex but not ready to text them yet? Dipsea has a story for that.

Dipsea is an app for Sexy Stories, Sleep Scenes, and Wellness Sessions designed to turn you on and let you explore your fantasies any which way you want. You can download Dipsea from the App Store, Google Play Store, or listen online.

Helen Oyeyemi’s newest novel, Peaces, opens with one of the most devastatingly on-the-noes recountings of a certain type of breakup. So accurate that it almost needs to be read aloud so that the reader is reminded this is a fictional story and not a walk through their own memory. See for yourself:

Have you ever had an almost offensively easy breakup? The kind where the person you’ve just broken ties with because of blah blah and blah gives you a slight shrug, a “Thanks for everything--especially your honestly,” then walks away whistling Hoagy Carmichael’s “I Get Along Without You Very Well”? Or has that been you--the low-key dumpee? I’ve never once taken it on the chin like that, never even thought of trying to.

Reactions in the Dipseaverse ranged from “Oh my god……” to “Well, I’m logging off for the day!” and finally just “Pass.” Suffice it to say, the majority of us have fallen into the “never once taken it on the chin like that, never even thought of trying to” club, and depending on when and who you ask, we’re all either happily or reluctantly residents of said club.

Breakups and, subsequently, exes are a near-universal experience for those of us past dating-age (that age being, of course, whatever age it was when you first went on a date). And as such, everyone’s got an opinion on how best to deal with the variety of exes that litter (or, hey, bloom) the garden of our past.

Some exes, like the whistle-and-walk-away type, might be harder to shake from one’s psyche, given the potential for the how-are-you-so-fine-without-me-when-I’m-not-fine-without-you spiraling our brains are wont to do. Whereas the exes who feel the continuous need to attempt to win us back when we are very much, definitely, absolutely certain that breaking up with the right thing to do, are far from difficult to push from our mind’s eye.

Regardless of what type of ex you’re dealing with, the former, the latter, or somewhere in between (exes are a spectrum!), there’s a near-universal school of thought long believed to be the tried and true rule of managing past relationships: never, ever get back together!

Getting back together with an ex is considered by many to be a major breakup faux pas, predominantly because it undoes the breakup. See how that works? Conventional wisdom would say that once you're certain a breakup is necessary (or that you have certainly been broken up with), to go back would only be prolonging the inevitable. That reopening old wounds only prevents them from healing. What’s done is done, conventional wisdom would say, let it go and leave it be.

Naturally, of course, convention and wisdom have little to do when it comes to matters of the heart. Let’s be honest, hooking up with an ex can just be… fun! And who doesn’t want to have a little fun? Sure, maybe it’s like diving a little too vigorously down a slip-n-slide that isn’t quite wet enough; fun for the first little rush but inevitably ends in at least minor aches and pains. But, hey, a little pain might be worth it, right?

According to science, right might actually be the answer. Or, more accurately, the answer might be that there’s actually less pain involved in hooking up with an ex than we all initially thought. As in, maybe even no pain at all. Yes, our minds are currently exploding too.

Results of several studies published in the journal Archives of Sexual Behavior found that hooking up with an ex doesn’t actually prevent you from moving on from your breakup, essentially throwing every group chat we’ve ever been a part of into utter and complete chaos.

Participants kept track of post-break-up experiences, which included info on whether or not they tried, or did, have sex with an ex. Overwhelmingly, the data suggested that people who ended up hooking up with their exes weren’t negatively impacted emotionally.

"This research suggests that societal handwringing regarding trying to have sex with an ex may not be warranted," said Stephanie Spielmann, one of the lead researchers. "The fact that sex with an ex is found to be most eagerly pursued by those having difficulty moving on suggests that we should perhaps instead more critically evaluate people's motivations behind pursuing sex with an ex."

And, well, we agree with her. And, as it turns out, so do sex therapists.

According to some research, over the course of the pandemic (sorry to even go there), about 1 out of 5 people attempted to or did reconnect with an ex. And, well, we get it. When the world is burning around us, sometimes going back to something that works, or at least worked for a while, seems like a pretty safe bet.

However, sex therapist Mark Williams said there are two questions one needs to ask oneself (and probably their ex!) before jumping back into things again, even if it’s just for a short period of time.

As the great Rose Byrne once said, if you’re growing, then you’re changing. Even if it’s just a little bit. And that’s an important conversation to have both with yourself and an ex before getting involved again. What’s different this time? Like, actually different. Not like, I got a haircut, so I’m a new person now. Fundamentally different.

Are the things you’re looking for different? Have your expectations shifted? Talk about the reasons you broke up in the first place and really dig into whether or not those issues have either been resolved or are now genuinely no longer an issue in the first place.

Is this about comfort or something more?

We all know why leftovers are incredible. One, because if you decided to keep them in the first place, that means you already know they’re delicious, And two, because they’re already ready and they’re right there. However, there’s a reason why we have to turn Thanksgiving leftovers into like, nineteen brand new dishes just to get through them, and still end up binning some of them regardless. Just because something is available, familiar, and was delicious at some point doesn’t mean it’s still good for you!

Basically, is your ex comfort food, or are they actually adding something to your life that you just couldn’t find anywhere else. You can find comfort in a lot of places (Thanksgiving leftovers, the arms of a best friend, both at the same time), but if someone has really brought something into your life that’s unfindable elsewhere, then sure, maybe reconsider.

Of course, should you know that getting back together with your ex is a bad idea, even if it’s just for a night, but you’re still looking to scratch that itch, don’t worry, we’ve got you covered. There are plenty of ex hookup stories on Dipsea. This way, you can enjoy the thrill without entering the danger zone.

Relationships
5 signs you have a fear of intimacy & 6 ways to overcome it
Sex
Relationships
How to use edging for hotter partnered and solo play
Relationships
Talk dirty to me: Phone sex for long-distance relationships